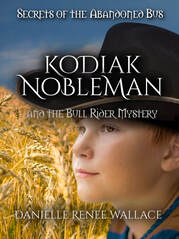 Available for purchase!
Kodiak Nobleman, also known as Cody, is thrilled. He hasn’t seen Uncle Colton since he was a baby, but now, at almost thirteen, that’s finally changing. It seems the only downside is that his parents are leaving shortly after his uncle’s arrival. However, they plan to be back in about two weeks.
Kodiak instantly likes his uncle and is amazed by his skills. While Uncle Colton seems just like an actual cowboy, Trevin Aragon, the meanest boy in all of sixth grade, claims to know something Cody doesn’t.
Later, while at the abandoned bus, a piece of news leaves Kodiak horrified. He instantly refuses to accept the information and is disappointed in his best friends, Lydia Arlington and Felicia Blackwood, for believing it could be true.
Though Cody can’t believe what he read, a disastrous event makes everything seem to fall apart.
As the time away from his parents grows, what will become of Kodiak—and what kind of man is his uncle really?

Buy now as an eBook or paperback
Try the snickerdoodle recipe